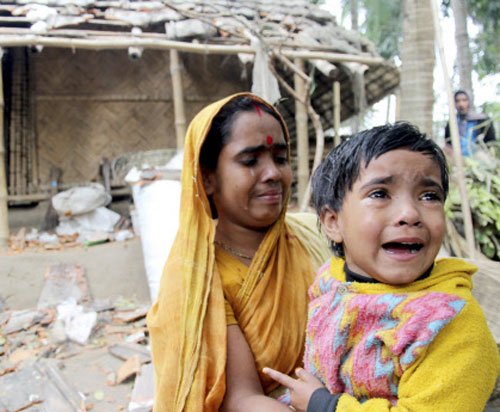 London: UK based rights organisation Campaign for the Protection of Religious Minorities in Bangladesh (CPRMB) has written to the Prime Minister of Bangladesh Sheikh Hasina raising their concern on the distribution of aid to Hindu minorities during Corona virus breakout.

In the letter dated 14 May signed by their President Debashish Das & Secretary Ajit Saha they say Bangladesh, along with the rest of the world, is facing a grave humanitarian crisis in tackling the COVID-19 pandemic. The government is expected to be leading this fight vigorously and impartially. Unfortunately, it is reported in the media that the endemic problem of Bangladesh policy is again manifesting itself in discriminatory policies being pursued against the minority communities. The minorities are being deliberately denied their fair share of relief and aid.

Many religiously motivated incidents have also been reported. There are persistent threats to some minorities to leave Bangladesh. In addition, bodily harm & abduction, damaging temples & properties of minorities, grabbing their lands, rape & oppression on girls from minority communities, converting poor families from minorities to Islam in return of giving them the aid & relief have become routine incidents across the country. They lists a number of recent incidents on minorities including in Sathkhira where Subol Chakraborty was forced to convert to Muslim- else leave the country, in Magura Sukanta Chakraborty’s land was grabbed & properties vandalised, in Jamalpur, old Shiva Temple was vandalised and land grabbed, in Rajshahi, Miss Ashtomi Sarker committed suicide as a result of abduction and being teased in Chittagong, Shukladas Para atrocities carried out on 30 families and threatened to leave Bangladesh, in Jessore Mrs Rita Sarker was raped and in Faridpur Suresh Pal’s family was attacked and badly injured. They add, other incidents have happened in Sylhet, Nilphamari, Bogra, Noakhali, Lakshmipur, Gaibandha, Barisal, Dhaka, Patuakhali and rest of the country.

CMRMB demanded that this institutional discrimination against minorities must stop with immediate effect, they should be accorded their due rights and share as equal stakeholders in Bangladesh. Copies were sent to PM political adviser H T Imam and Dr. Gower Rizvi, PM’s foreign affairs adviser. CPRMB also sent donation to Bangladesh Puja Udjapan parishad for Covid 19 relief work.