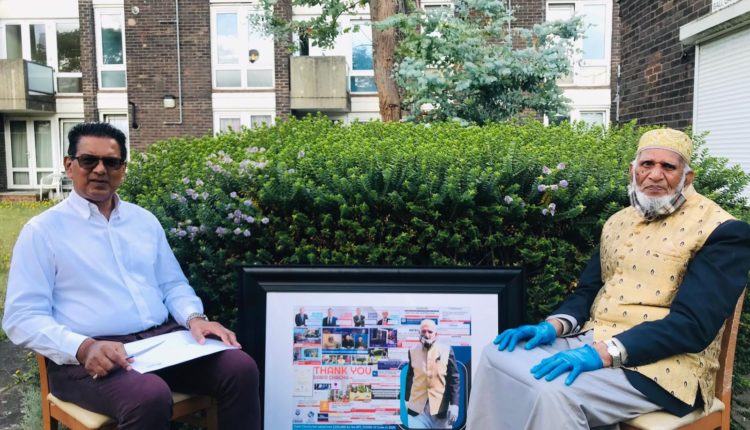 London: 100-year-old British Bengali Dabirul Islam Choudhury has been awarded an OBE (Order of the British Empire) in the Queen’s Birthday Honours for raising £420,000 for coronavirus charities during Ramadan. Dabirul Islam Choudhury raised the sum by walking 970 laps of his 80-metre garden in East London during the holy month of Ramadan.

The news of Queen’s honour came from the cabinet Office couple of weeks ago informing of his OBE which he accepted with great pleasure. Speaking to Shottobani on his reaction, he said, ‘I didn’t think of getting any honours. I have always helped people in our community and in the current circumstances I wanted to do my bit’.

Dabirul Islam Choudhury came to England in 1957. He initially lived in Maidavale, then settled in St Albans, moved to Hatfield and finally residing in London. He currently lives in his residence, in Bow area of London borough of Tower Hamlets. Dabirul Islam Choudhury moved to the UK to study English literature and eventually settled down in St Albans. While in St Albans he became a community activist for his fellow country men as their understanding of English, reading and writing were very minimal. Dabirul Islam Choudhury assisted people with getting housing, filling up documents. He also represented them as an interpreter and an advocate to various service providing institutions. His son Atique Choudhury who helped with this interview remembers their house always being full of people on a regular basis seeking help and advice from his father. Dabirul Islam Choudhury was involved with the East Pakistani Restaurant Association. He was one of the instigators of the early days and had a restaurant in the early 1960s.

This is the first time any Bengali has donated, that kind of money to any institutions, especially to the NHS, which has been key for the Bangladeshi community, who have been affected more by the coronavirus compared to other community. The rest of the sum was divided across 30 charities through the Ramadan Family Commitment organised by the UK based Bengali language satellite Channel S. The funds were distributed to victims of the coronavirus in the UK, Bangladesh and worldwide among 52 countries.

Dabirul Islam Choudhury’s son Atique Choudhury explained his father began walking 100 laps in his 80-metre garden on 26 April to raise £1,000 but hit the target within 6 hours. It was a time when the UK was heading towards a calamity and people wanted to help. It was in that spirit of things, seeing Captain Tom Moore on television, walking to raise money inspired Dabirul Islam Choudhury to do the same. He wanted to do something while in self-isolation.

As for future, he said he would be working with the Foundation set up by Captain Sir Tom Moore who was knighted for his achievements for raising money for charity by doing laps of his garden in the run-up to his 100th birthday during the Covid-19 pandemic.