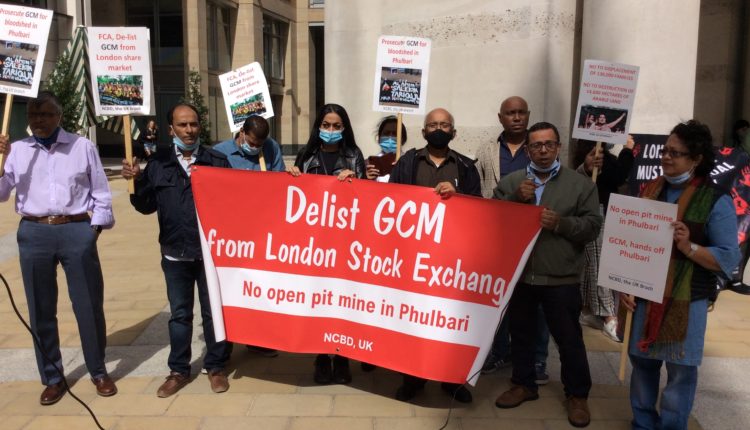 London: A protest rally was held, on Wednesday 26th August 2020, in front of London Stock exchange demanding the de listing of Global Coal Management, formerly trading as Asia Energy, for alleged fraudulent activities in Bangladesh. The rally was held on Phulbari Day amidst social distancing and strict police presence.

Those gathered at the rally were also commemorating the brave martyrs Tariqul, Al-amin and Salekin who were brutally gunned down by the police in 2006 while peacefully protesting against GMC aka Asia Energy.

Dr Akhter Sobhan Masroor laid the blame on GMC for the brutal repression and firing. He also reiterated the demand for the Company to be delisted since they were trading without any legal or valid contract with the Bangladesh government. Dr Mukhlesur Rahman condemned the Stock Exchange for ignoring their call for an independent investigation on the activities of GMC. Dr Rafiqul Hasan Jinnah pointed out the negative environmental impact of the coal project in Phulbari and argued for a green friendly industrial policy. Mostafa Farook demanded the complete ban of GCM in Bangladesh and full implementation of Phulbari agreement. He also warned against the encroachment of multinational companies in the economic sector and damaging environment and ecology in Bangladesh. Abul Kashem said that the Phulbari project would destroy 14,000 acres of fertile agricultural land and 50,000 water bodies. Mizanur Rahman Bablu said that the project would bring irreparable damage to the life of local population and eco-system.

On Behalf of the rally a memorandum was submitted to the Chief Executive and Chief Financial Officer of the London Stock Exchange, David Schiwimmer and David Warren. It contained a number of demands including the immediate cessation of trading by GMC and an independent and impartial enquiry into their financial dealings. A complaint about GCM raised and a memorandum also submitted to the Financial Conduct Authority (FCA).

The rally was jointly organised by the National Committee for Protection of Oil, Gas (UK Chapter), Global Justice Rebellion and Coal Action Network. A solidarity programme was also organised by Phulbari Coalition