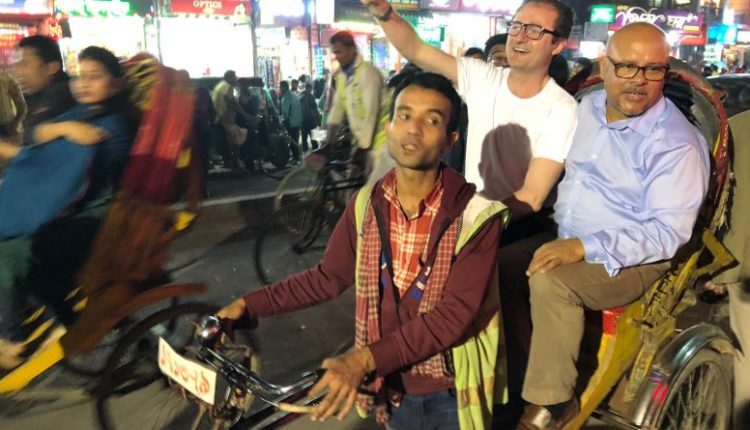 From Downton Abbey to downtown Dhaka

As a freelance writer and actor in the UK, when the opportunity arose last week to join a delegation of print and media journalists from London who were visiting Bangladesh, I jumped at it.

I was humbled by the vast knowledge and experience which my British/British Bangladeshi media colleagues possessed about this most beautiful of South Asian countries and then, the moment our plane touched down in Dhaka, exhilarated by the vibrancy and sense of excitement pulsing through a country which could very possibly be on the verge of greatness. 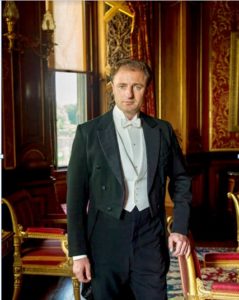 As a ‘Bangladesh Beginner’, sifting through UN and BDHS reports (Bangladesh Demographic Health Survey) is a necessary requirement to get up to speed, statistically, on the most densely populated nation in the world (with the exception of city states such as Singapore, Vatican, Bahrainetc). A country which boasts more than 160 million citizens.

But such documents are no substitute for being on the ground, slogging through downtown Dhaka traffic in a rickshaw (I survived…just), laughing and exchanging life-stories with food vendors in the street, whilst being afforded the privilege of participating in round-table conferences with media ownersand editors, lawyers and even a member of Parliament, Mahjabeen Khaled, and a retired Bangladeshi Major General, Maj. Gen. Md Abdur Rashid (Retd). 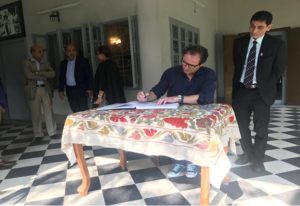 I was constantly reminded during my trip that a festival atmosphere accompanies elections in Bangladesh. Throughout the 64 districts and 545 thanas, parties throng the streets, sumptuous meals are being prepared in anticipation of the forthcoming elections on the 30th December.

I was struck by the sense of national urgency, of the importance of these elections which permeated many, if not most, of the conversations I enjoyed. Other than discussing how delicious Bangladeshi food is, politics was the go-to topic never far from people’s lips.

And for good reason.

Bangladesh stands on the cusp of becoming a truly dominant force amongst its South Asian neighbours. With an enviable GDP growth rate of 7.7%, with accelerated expansion in its garment industry, and an ever-increasing productivity in manufacturing, construction and agriculture, gross national income (GNI) on the rise, Bangladesh is considered a lower-middle income country (World Bank). But with a stated aim from the current government to increase GDP to 10% and become a middle-income country, there is all to play for on the 30th December when the country goes to the polls. 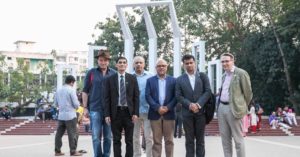 When attracting Foreign Direct Investment (FDI), democratic stability and developed infrastructure are key for any country. Bangladesh is racing ahead with the latter.

A short trip from Dhaka led my journalist colleagues and meto the mighty Padma Bridge project, or “The Bridge of Pride” as it’s known. An impressive behemoth, a 6.15km multipurpose road and rail construction linking vital resourced and under-resourced areas, which promises to be just the kind of infrastructure to give FDI confidence in the growing capabilities of a thriving nation. Crucial to further socioeconomic development, there are many more construction projects in the pipeline, aimed at linking the low, flat lands of Bangladesh and the network of rivers that fan the nation, such as the Brahmaputra-Jamuna, Megna and Ganges-Padma rivers.

However, these projects will count for little in the eyes of the outside world, and negatively impact FDI, if they are not couched in democratic dependability and secureness.

Bangladesh is currently bearing the full brunt as understandably reluctant hosts to the 1.1 million Rohingya refugees, displaced from Myanmar. This crisis threatens to be an insoluble issue on a grand scale. In seeking a bilateral, non-military response to the crisis, Bangladesh must assert itself within the competing powers of India and China to co-ordinate a satisfactory and safe conclusion. To ensure it takes its rightful place on this stage, Bangladesh must send out a rallying cry to the world, and the most sure-fire way to achieve this is to ensure democratic probity.

As Sheikh Hasina of the Awami League takes on the Bangladesh Nationalist Party and its allied party, the Jamaat-e-Islami on the 30th December, questions surrounding how free, fair and participatory these elections are, swirl around the international community. With each side slinging accusations of intimidation and suppression at the other, it falls on the Election Commission (EC) to police proceedings.However, with the very efficacy of the EC being thrown into question in foreign media, Bangladesh democracy is undoubtedly at a crossroads when it comes to external perception.

For Bangladesh to prosper it must shake off the scars it has suffered with numerous terrorist atrocities meted out on its people, foreigners and outspoken secularists in recent years. It must honour its people with the open elections they deserve.

Whilst Bangladesh might feel that laws such as the Digital Securities Act, which parliament recently approved, ensuresagainst ‘fake news’, to the outside world these laws come worrying close to press suppression at best and press intimidation at worst. This Act should not be used by the government against its detractors, and seeing as members of the press charged with sedition and defamation face the prospect of custodial terms, the fate of an independent press lies in the balance. 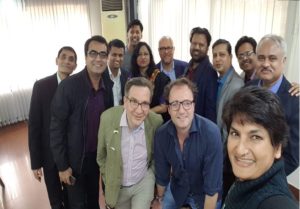 During my trip I had the honour of a tour of the Bangabandhu Sheikh Mujibur Rahman Memorial Museum, housed in the very home where The Father of the Nation and so many where murdered. The rich and important history surrounding this remarkable man, his endeavours and his struggles made a visceral impact on me, and embody the very best of Bangladesh: pride, humility and nobility of purpose.

I leave Bangladesh, returning to my life as a writer and actor in London, grateful to Bangladesh for its hospitality, touched by the warmth and intelligence of its people, and in awe of its vigour.I am hopeful that as the election approaches, the words of Bangabandhu ring loud in each and every voter’s ear: “I have given you independence, now go and preserve it.”