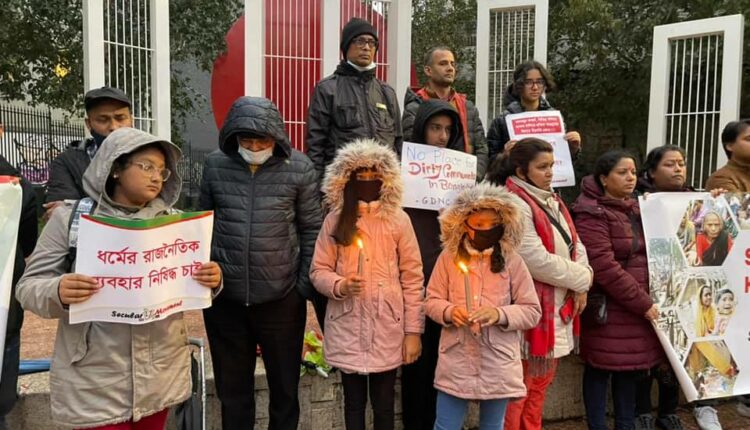 London: An Early Day Motion (EDM) was tabled on 20 October 2021 at the UK Parliament by Virendra Sharma MP. The motion notes the concerning rise in attacks on Hindus and other religious minorities in Bangladesh during the festival of Durga puja, is concerned by the violence that has left at least seven dead of Muslim and Hindu faith, observes the deployment of paramilitary forces to 22 districts in Bangladesh; urges the Government of Bangladesh to act to ensure religious minorities can worship safely and in peace and calls on the Government to support the safety of religious minorities and to work with regional allies and partners to support freedom of religion for all in South Asia and the world.

EDMs are used to put on record the views of MPs or to draw attention to specific events or campaigns, tabled to formally call for debate “on an early day”.

There have been wide-ranging protests from various diaspora faith and human rights groups in the UK against atrocities carried out during Durga Puja. On 18 October, a protest rally of the UK Nirmul Committee was held in East London’s Altab Ali Park to protest the communal attacks in Bangladesh. The speakers expressed their indignation over the lack of trials of any communal attack in the past, including Ramu, Nasir Nagar and Shalla. The meeting immediately demanded the ban of violent communal politics in the name of religion, the passing of the Minority Protection Act and the formation of a minority commission. The rally also called for a return to the secular constitution of 1972.

On 19 October, Cllr Pushpita Gupta of ‘Secular Bangladesh Movement’ went on hunger strike with similar demands from 6am to 7pm outside the Bangladesh High Commission in London. On the same day, a memorandum was submitted by the humanitarian organisation ‘Humane First Movement’ to the United Nations Office for Human Rights in protest of communal violence in Geneva. The memorandum was handed over to UN High Commissioner for Human Rights Michelle Bachelet Jeria to act against the ongoing heinous communal attacks and violence in Bangladesh and to draw the attention of the international community.

On 20 October, Bilete magazine held a round table discussion at the London Bangla Press Club demanding justice and compensation for the victims. On 23 October, Jagannath Hall Alumni Association has called for a demo outside Bangladesh High Commission in London. Similarly, another organisation has called for a mass demonstration on 27 October outside Parliament Square in front of the Houses of Commons and in front of the BBC.