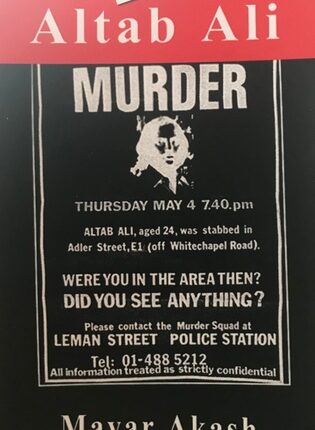 London: Altab Ali: The Murder, written by Mayar Akash, is the first book in a series of four books. The book covers the murder of Altab Ali and what happened following the murder. In his book, Mayar Akash explores how following the death of Altab Ali, the community was forced to say enough is enough and how they turned the loss of Altab Ali into a symbol of defiance to racism.

The book explores the condition that led to the murder. As the number of migrants from Bangladesh grew and the economic condition deteriorated for the White working-class population of East London, the Bengalis were scapegoated for all of their ills by the far-right National Front. Attacks on Asians became common. Despite anti-racist activism and the Rock against Racism concert held in local Victoria Park, the murder of Altab Ali and within months, Ishaque Ali and Ambor Ali lost their lives in racist attacks. On the day of the attack on Altab Ali, local elections were taking place and the National Front had put up candidates in all the wards adding to the build up of racial tensions. Additionally, the National Front had moved their HQ from South London to Great Eastern Street, not far from Brick Lane. In the book, Mayar Akash examines who carried out the attack and where they came from with diagrams and maps. The attack was carried out by three teenagers, all from Tower Hamlets. He also includes the testimony of a Bengali witness, Shishu Choudhury, who was 14 years of age at the time. With his uncle and a Pakistani man, Shishu was waiting at the bus stop on Whitechapel Road. Altab Ali managed to drag himself from Adler Street to the bus stop after the stabbing, perhaps looking for help and collapsed. Shishu and others went to the nearest phone booth to call for an ambulance. At the same time, a White passer by on a motorbike stopped and came to Altab Ali’s aid. Soon after, an ambulance arrived and took Altab Ali to Royal London Whitechapel hospital but pronounced him dead.

Mayar Akash lived from 1973-1994 when the Bengali community fell victim to Paki bashing that included verbal abuse, physical attacks, muggings and robbery, and beatings by far-right activists their followers. Mayar Akash, a photographer, author and activist himself during the 1990s with the Progressive Youth Organisation, picks up the story of anti-racist activism in his book. He also spoke to Altab Ali’s cousin Abul Husain’s wife, Jusna Hussain. Altab Ali was staying with his cousin in Wapping at the time of his death. Wapping at the time was considered unsafe, and they had asked Altab Ali to move in with them. Prior to that, Altab Ali lived in Wentworth Street, Spitalfields.

In the book, he also views how the national press covered the incident. He observes that this was the first time the UK press reported about the Bengali community and probably discovered them since the Bangladesh independence movement. The first report probably appeared the Daily Mail on 6 May 1978 with 25 word reporting, in Daily Mirror on 6 May 1978 in a sentence which was followed by other press reporting, including an article published in the Times on 12 May 1978, 15 May 1978, 30 June 1978 reporting on three boys being charged, 5 August of trial, Coventry Evening Telegraph on 19 May 1978, and local East Ender paper on 11 May 1978, 13 May 1978, 19 May 1978, Bengali paper Janomot on 14 May 1978, 21 May 1978 covering the protest, 11 June 1978 of the news of the funeral and body being sent to Bangladesh, 9 July 1978 of the charges, in August news on trial. The Daily Mirror also reported on 23 November 1978 of the three one being sentenced to manslaughter and the other two of attempted robbery, but the judge commented being influenced in an area of high immigrant population referring to the Bengali population by the propaganda of a fringe political group i.e. the National Front. Mayar Akash observed while the Bengali paper gave front-page coverage to the incident, the national papers gave only one column of news inside the paper.

The murder provoked mass mobilisation of the Bengali community with the setting up of self-help groups. The 14 May 1978 protest march to Hyde Park is also covered. Photographs, map routes and the delegation that went to 10 Downing Steet features in the book. Copy of death certificate and mage of Altab Ali’s burial place in Bangladesh is included. Mayar Akash lists Altab Ali’s family members, his parents, wife, brothers and sisters, friends in the UK with their photographs and reactions to the death. The book also contains a list of vigilante activists and a timeline from the time Altab Ali arrived in the UK to the present. The book has a bibliography and a rich source/references list, which would be useful for anybody interested in further research.

The book ‘Altab Ali The Murder’ is published by MA Publishing and is dedicated to Altab Ali’s family and the elders, the vanguard of the UK Bengali community.