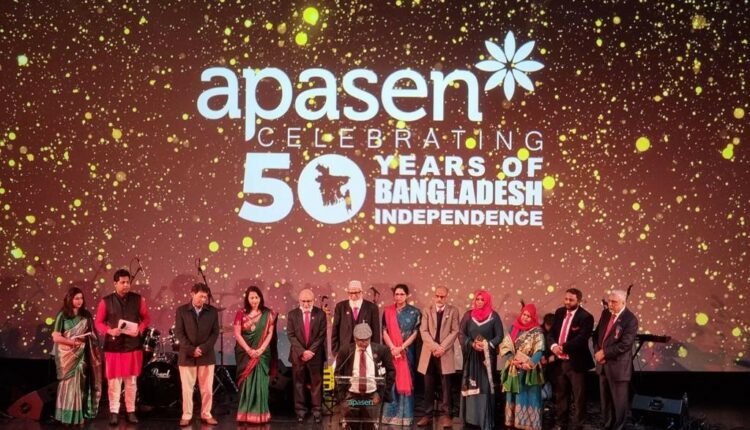 London: Apasen, a charity dedicated to help people with disabilities & special needs, celebrated the Golden Jubilee of Bangladesh’s independence and 37th anniversary of Apasen on 5 December at the People’s Palace, Great Hall, Queen Mary University of London, in East London.

The celebration, which began with the singing of Bangladesh’s national anthem by children and young people, was virtually joined by the legendary BBC journalist Sir Mark Tully. In addition, greetings from Prince Charles and Prime Minister Boris Johnson were also aired on the occasion. In his welcome address, Mahmud Hasan MBE, Chief Executive of Apasen, highlighted the close connection of the organisation with the state of Bangladesh from its inception till date. Saida Muna Tasneem, Bangladesh’s High Commissioner to the United Kingdom, said it was the most spectacular event she had attended during her tenure as High Commissioner. Rushanara Ali MP, Chair of All Party Parliamentary Group on Bangladesh, Apsana Begum MP and John Biggs, Executive Mayor of Tower Hamlets Council, also spoke. 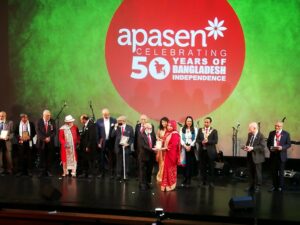 On the occasion of the Golden Jubilee of the Independence of Bangladesh, honorary crests were handed over by Apasen to the freedom fighters residing in the UK. The first part of the cultural programme started with the song of awakening during the War of Independence with the participation of famous British Bengali artists. Throughout the programme, there were exceptional performances of folk and modern dances, poetry recitations and documentaries on the Liberation War and Apasen.

Throughout the event, images of the Liberation War of Bangladesh projected on the huge screen drew the audience’s attention. In the second phase of the cultural programme, folk songs and contemporary and movie songs were performed, apart from the songs of Swadhin Bangla Betar Kendra. In addition, an exhibition of the Bangladesh struggle in the United Kingdom in 1971 and the 36-year journey of Apasen were on display. The celebrations came to an end with a speech by Amir Hossain, Chairman of the Apasen Board of Trustees. Apasen also published a commemorative publication as part of the celebrations of 50 years of independence.