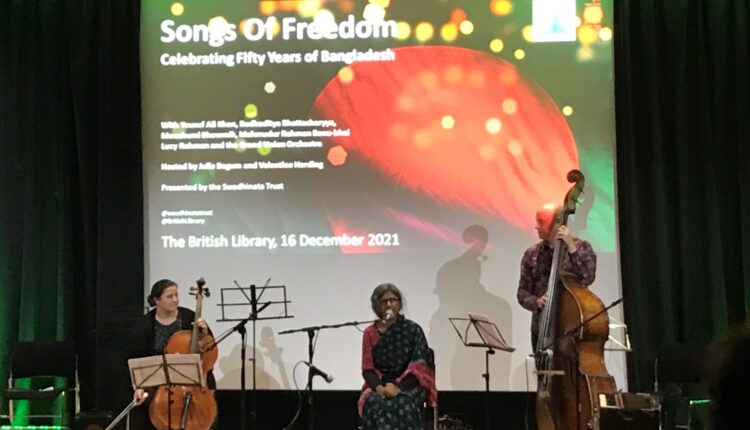 London: The UK based Bengali heritage organisation celebrated Bangladesh’s 50th Victory Day with an event at the British Library on 16 December with an evening of stories, songs and music from 1971.

Moushumi Bhowmik, an Indian Bengali singer, writer and music archivist who composed and sang the iconic ‘Jessore Road’, based on Allen Ginsberg’s poem ‘September on Jessore Road’, for Tareque & Catherine Masud’s 1999 documentary Muktir Kotha, performed the song at the event.

Budhaditya Bhattacharyya, an Indian Bengali musician and music researcher, based in the UK, performed Bengali classical music. He is a researcher at Durham University, working on musical histories of migration and citizenship between Bengal and Britain.

Finally, The Grand Union Orchestra, led by composer Tony, was joined by Yousuf Ali Khan and singer Lucy Rahman performing songs by her father Sheikh Luthfur Rahman, a singer-songwriter and activist in the cause of independence.

For the occasion, the British Library auditorium was lit up in Bangladesh’s colour of red and green. In addition, in separate initiatives, other landmarks were lit up in Bangladesh’s colour, including St Georges town hall & Queen May Univery in London Borough of Tower Hamlets and the iconic Tower Bridge at the initiative of City of London Councilman Munsur Ali. Councilman Munsur Ali said, ‘I am proud and delighted that we have made history by covering the most iconic landmark in red and green colours of Bangladesh to celebrate 50 years of independence.’