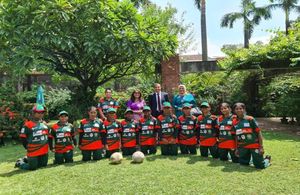 The team is comprised of children who were all rescued from life on the streets, and now live at the LEEDO Peace Home in Dhaka.

LEEDO (Local Education and Economic Development Organisation) is a not-for-profit, voluntary-based development organisation founded in 2000. Through the provision of education, shelters, and lifestyle support, LEEDO aims to protect vulnerable street children and help them return to the mainstream community.

During the event, the young guests shared stories of their time living on the street and appealed to guests to help improve the life chances of other less fortunate children. They were excited about the opportunity to meet two players from the Bangladesh U-19 National Football Team, Most Aklima Khatun and MST Halima Akhther, and talk to the professional players about their upcoming big game. They also showed off their footballing skills and challenged the British Deputy High Commissioner to a ‘keepy-uppy’ contest!

British Deputy High Commissioner Javed Patel said, “Ensuring 12 years of quality education for all children is at the centre of the UK’s drive to tackle poverty, promote gender equality, boost economic growth, and reduce conflict. In Bangladesh, we are investing up to 54.5 million pounds over the next eight years to improve education outcomes for children, particularly girls and marginalised children. I wholly believe that sport is integral to a child’s education, and today we are proud to stand with the girls’ football team that will be representing Bangladesh on the international stage.”

Forhad Hossain, Executive Director of LEEDO said, “We should all raise our voices together to protect the most vulnerable children from the dangers of the streets so that they can create a better Bangladesh. According to the UNCRC all children have the right to survive with dignity. I want to thank the British High Commission for organising this event with LEEDO.”