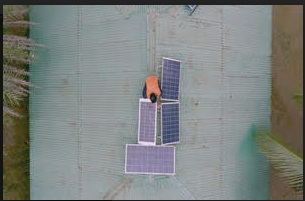 To mark the occasion, the British High Commissioner hosted a celebratory event where guests learned more about Solshare’s ground-breaking work to repair our planet, and the finalists received a personal message from HRH Prince William, who congratulated them on their fantastic achievement.

Congratulating Solshare, the High Commissioner said, “Reaching the final three in the global Earthshot competition is a huge achievement for Solshare. I am delighted that FCDO will now provide £300,000 to a partnership between Shakti Foundation and Solshare, to help scale up their innovative model using rooftop solar home systems for peer-to-peer energy exchange networks, enabling poor households both to generate electricity from a renewable source and gain an income by selling their surplus energy to the national grid. Solshare’s innovative work will help Bangladesh move towards carbon neutrality and improve the lives and livelihoods of millions of Bangladeshis.”

Launched by Prince William and The Royal Foundation in October 2020, The Earthshot Prize is the most prestigious global environment prize in history. Inspired by President John F. Kennedy’s ‘Moonshot’, which united millions of people around the goal of reaching the moon, the Earthshot Prize aims to discover, spotlight and scale up the best solutions to the world’s greatest environmental challenges.

The Earthshot Prize is centred around five ‘Earthshots’: Protect and Restore Nature; Clean our Air; Revive our Oceans; Build a Waste-free World and Fix our Climate. Solshare was one of three finalists in the “Fix our Climate” Category.