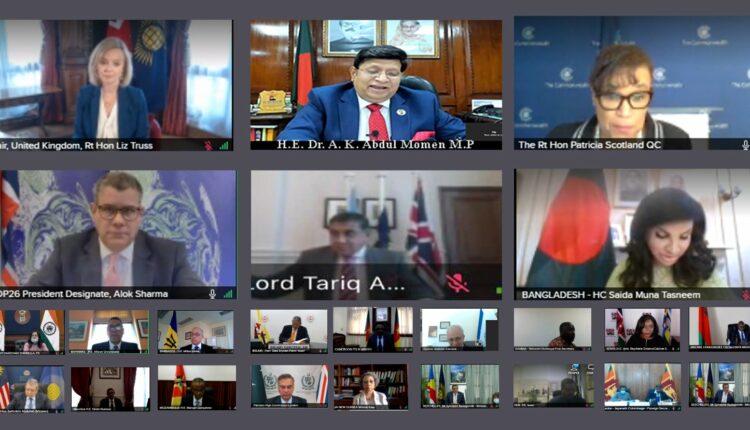 Londonঃ “Bangladesh would like to categorically reiterate that the earliest repatriation of all forcibly displaced Rohingyas back to their ancestral homeland in Rakhine in safety and dignity remains our compelling priority’’, said Foreign Minister Dr. A. K. Abdul Momen while addressing the 21st Commonwealth Foreign Affairs Ministers Meeting (CFAMM) held virtually in London on Thursday chaired by the UK’s newly appointed Secretary of State for Foreign, Commonwealth and Development Office (FCDO) Elizabeth Truss.

Dr. Momen also called upon key Commonwealth members including the UK, Commonwealth Chair-in-Office, to engage with Myanmar for its compliance with the ‘Provisional Measures’ by the ICJ and expedite return of the Rohingyas to their ancestral homes in Myanmar.

On the question of Covid vaccines, Foreign Minister reiterated Prime Minister Sheikh Hasina’s call for vaccines to be delivered as global public goods without discrimination and disparity and urged Commonwealth Ministers to raise collective voices for early and equitable distribution of vaccines under the COVAX.

Bangladesh High Commissioner to the United Kingdom and the Governor of the Commonwealth Board of Governors Saida Muna Tasneem participated in the meeting and presented the report on the Commonwealth Ministerial Group on Guyana meeting chaired by Bangladesh Foreign Minister last Tuesday.