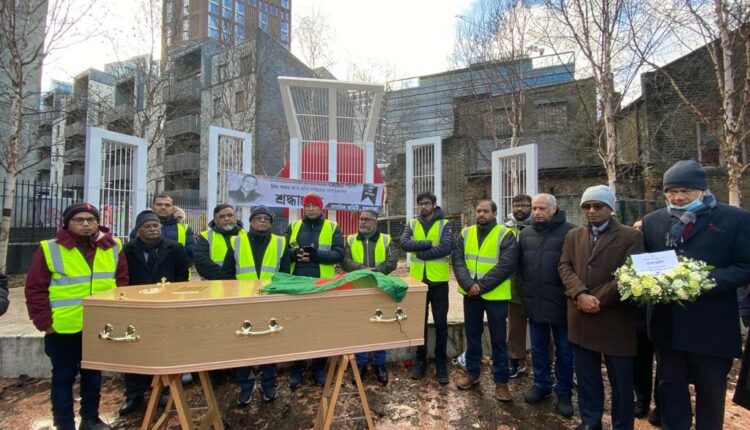 Londonঃ On Monday, 16 January, UK Bengali journalist paid their last respects to prominent journalist Ajoy Paul. On the day, from 1.30 to 2.30 pm, the body of the deceased journalist was kept at the altar of the central Shahid Minar in Altab Ali Park, East London, for the tributes of all people.

The event was organised under the supervision of the Citizens’ Committee, formed on the initiative of friends and journalist colleagues of the deceased to pay their last respect. The Member Secretary of the Citizens Committee, journalist Ahad Chowdhury Babu, conducted while Dilu Naser read a brief biography of the deceased. Then, a minute’s silence was observed as a mark of respect for the deceased. Then, Himangshu Goswami and Gauri Chowdhury paid their last respects by singing the national anthem.

In December 1970, a young Ajoy Paul sent his first report to Sylhet’s oldest newspaper, Jugaveri. More than five decades of the journalistic life of Ajoy Paul are full of rare experiences and gems of monumental achievements. However, the most shining chapter in his life was the experience of working in Daily Jagaran, published from Agartala, India, during the Liberation War of Bangladesh in 1971.

Ajoy Paul is one of those talented journalists who started a new trend in the 1970s and 1980s. The language of the news was clear, and the subject was diverse. It will not be an exaggeration to say that Ajoy Paul has made a unique contribution to modernity in Bengali journalism. He, however, deserves the credit for connecting greater Sylhet to the changing era of Bangladeshi newspapers. This achievement is confirmed by the fact that he worked in all reputed newspapers in Bangladesh, the and UK, Canada.

Among the national dailies, apart from Banglar Bani, Dainik Sangbad, Desh Bangla and Bangla Bazar, he also worked for Sylhet’s local daily Sylhet Bani for some time and for Jugaveri, Sylhet Samachar, Deshbarta and Sylhet Dhani. Initially, he served as Sylhet correspondent for Surjer Desh newspaper, published from Sunamganj. After that, he was associated with UK’s weekly Surma, Jagaran, Potrika, Deshbarta, Purbodesh and Bangla News, published from Canada. In 2008, he was the acting editor of Monthly Hridaye Bangladesh magazine, published in London.

Apart from journalism, Ajoy Paul was also unique and incomparable in poetry and composing songs. Renowned artists like Subir Nandi, and Himanshu Goswami have given voice to his songs.

At the time of his death, he left behind his wife, two sons, relatives and many well-wishers.