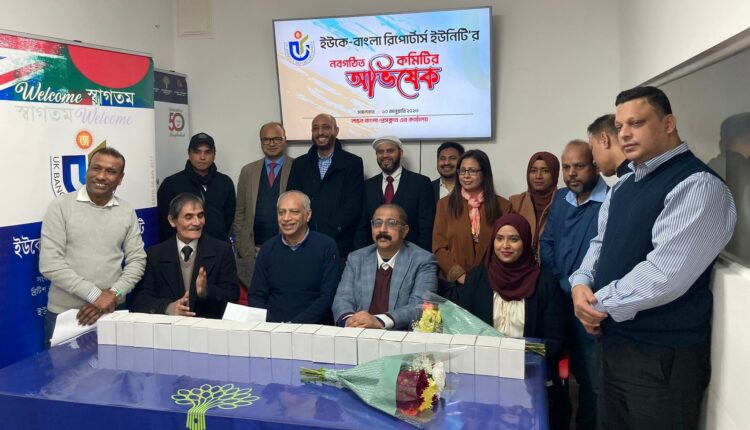 Speaking as the chief guest, Shabbir Shams, Minister (Public Diplomacy) of Bangladesh High Commission in London “said that the 10th of January is a memorable day in the history of independence of Bangladesh because, on this day, the architect of the nation Bangabandhu Sheikh Mujibur Rahman returned home”. It is indeed commendable that the new committee of UK Bangla Reporters Unity, an organisation of British Bangladeshi journalists who believe in the spirit of the liberation war, started their journey on this memorable day. He assured full cooperation on behalf of the Bangladesh High Commission.

Special guest former Tower Hamlets Deputy Mayor Cllr Asma Begum said she hopes the organisation can play a stronger role in bridging the gap between the UK and Bangladesh by sharing news. She also emphasised highlighting the positive achievements of the UK Bengali community.

Accepting the responsibility, the newly elected president of UK Bangla Reporters Unity, veteran journalist Matiar Chowdhury expressed his gratitude to everyone and requested the cooperation of all members in the implementation of the pre-determined project of Reporters Unity. He promised to complete the UK Bangla Reporters Unity Scholarship 2023, the UK BRU Media Award 2022, and Best reporter of the Year 2022. However, he said that the information of the nominees who received the award would be collected soon and given through a ceremony in March/April 2023 in English. A minute’s silence was observed on the death of senior journalist Ajay Pal.