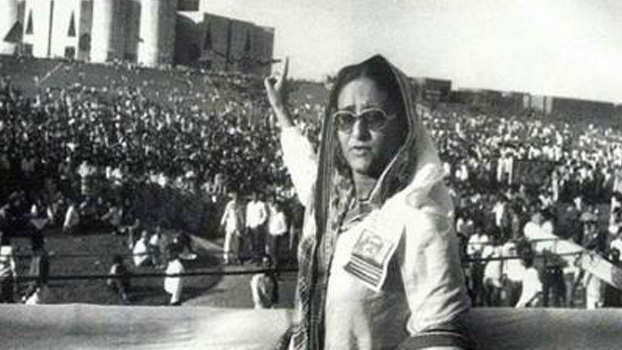 Our Apa, Our Belief

Over the years it has been my unique opportunity, despite being a doctor, to come in contact with eminent intellectuals and knowing them closely going beyond my profession.

This has been possible due to my affiliation with different civil society organizations like ‘Sampritee Bangladesh’ and ‘Forum for Secular Bangladesh and Trial of War Criminals of 1971’. Because of my attachment to these bodies, I have been blessed with the affection of so many people who are nothing short of the nation’s vanguards. As I am writing this article trying to express my feelings on the home coming of Sheikh Hasina, our Hon’ble Prime Minister, but more importantly the torch bearer of Father of the Nation Bangabndhu Sheikh Mujibur Rahman, I was wondering where to start from. It so happens that I just attended an online seminarwhere we remembered late National Professor Dr. Anisuzzaman, who was a guardian to Sampritee Bangladesh from the very first day of it’sinception.

We had another respected figure, eminent journalist Mr. Abdul Gaffar Chowdhury narrating about his close friend from his early days, late Dr. Anisuzzaman at our ‘SampriteeSanglap’. Obviously the home coming of Hon’ble PM also came up during the discussions. And there I found my expression – the return of Sheikh Hasina to her mother land from exile so brilliantly described in a few words by Mr. Abdul Gaffar Chowdhury.

‘It was with her return that we got our Bangladesh back’, said Mr. Chowdhury.And he went on to add that,‘it was Bangabandhu’s Bangladesh hijacked by Ravanas that Sheikh Hasina won’t back for us!’

Since the inception of Bangladesh, the defeated forces of 1971 were active from day one to portray the newly liberated Bangladesh as a failure.

The events leading to the coup on August 15, 1975 were not mostly, but completely, created by a handful pro-Pakistani elements in disguise.

Despite attaining an enviable seven percent plus GDP in 1974 under the leadership of Bangabandhu, the young Bangladesh was faced with a famine which was largely due to the redirection of ships load of food grains for Bangladesh under the PL480 scheme at the last moment.

The political instability crated by the so called leftists and scientific socialists further fueled the gloomy canvas of Bangladesh in 1975.

After the assassination of Bangabandhu and his ill-fated family members, the country was practically ruled by Pakistani regime with a Bangladesh face.

In fact the country’s name had also been changed to Islamic Republic of Bangladesh for a brief period and we had Jinnah cap as part of our national attire for a while.

Had Sheikh Hasina not returned to Bangladesh on this day in 1981 defying all obstacles and hostilities, although many may like to debate my next statement, I still firmly believe that my next generation would hardly relate themselves as proud Bengalis of Bangladesh today.

As I was writing in the initial part of this article, fortunately I have been blessed by many enlighten people.

One of themis Professor Abdul Mannan, former Chairman of University Grants Commission of Bangladesh. He is kind enough to share his articles with me through facebook messenger regularly, whichI find much thought provoking and academic.

In one of his recent articles he has described Sheikh Hasina as the lonely Sherpa. A Sherpa returns alone riding on glories to lead his people to the next goal to cherish.

Professor Mannan correctly titled his article, ‘The Homecoming of Sherpa Always Mattered’. What a brilliant way to describe, the homecoming of a leader who rode on the glories of her glorious father, defeated the forces of evil and has since been relentlessly leading the nation towards a glorious tomorrow.

However the challenges are not over for Sheikh Hasina and her people. The forces of the dark are still active and in these darkest ‘Corona days’, when the Mother of Humanity is leaving no stones unturned to alleviate the sufferings of her people, we are seeing a section of the country trying to benefit out of the confusions and urgencies generated by COVID-19. Sheikh Hasina is, on one hand, leading the nation’s battle against COVID-19 single handedly and on the other hand, passionately taking care of every vulnerable person of the society starting from the Imams to expatriates to the middle class.

But as another person whom I respect and consider myself to be blessed having his blessings, Mr. Pijush Bondopaddhaya so rightly articulated in one of his recent articles, that these opportunists are trying to hunt in the dusty terrain.

I did not find it at all surprising when Mr. ZiauddinBablu, a former Cabinet Minister, who is like an elder brother to me was telling me the other day as we had a long telephone chat, that how come the country maintained it’s glorious journey on the highways of development despite the opposition imposed ‘lock-down’ for six months in 2013 and then again for almost similar duration in 2015, by dint of arson, bomb blasts and burnings of humans and cattle alike, if we cannot sustain the lock-down of today for a month or so, which is purposed to save the people.

None of us are surprised, neither Pijush da, nor Bablu bhai, nor me. Although we are separated in age by years, all of us have witnessed these evils who have repeatedly tried to gain creating chaos from confusions like that prevailing today, but have always been forced to go back to their dark holes after being defeated at times by Bangabndhu and at other time by his able daughter.

Like Mr. Abdul Gaffar Chowdhury or Professor Abdul Mannan, we not only believe, but know for sure from the core of our hearts that our ‘Apa’ will once again lead us towards a brighter day.