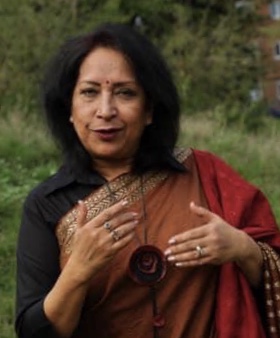 London: Poet Shamim Azad, was recently honoured by UK’s The National Lottery for her tireless contribution to the community through her work in the Arts. The National Lottery is the state-franchised national scheme of the United Kingdom with the primary aim of raising finance for the Arts, culture and charity sector.

With more than 6000 nominations from different parts of the UK, Shamim Azad is one of the 13 dedicated and devoted art personalities, recognized for their unique mission to bring creativity, and enrichment to people and maintain mental health in new ways.

As a part of the recognition, eight of the UK’s most iconic art galleries, and the UK’s lead organisation for film, television and the moving image have come together to present a unique photography exhibition, which will
continue for a month, for these 13 honoured art personalities, who have been keeping the arts in their local area alive and accessible for all during the difficult days of the pandemic. The digital exhibition titled The National Lottery’s 2020 Portraits of the People, will display the portraits and the stories of the awardees and can be visited on the websites and social media of: The National Portrait Gallery, London, The National Museum of Wales, Cardiff, The MAC in Belfast, IKON Gallery in Birmingham, Summerhall in Edinburgh, Tŷ Pawb, Wrexham, Ruthin Craft Centre in Ruthin, Wales, the Photographers’ Gallery in London and the British Film Institute (BFI).

Shamim Azad is a bilingual poet, writer and storyteller, has more than 30 works – ranging from poems and novels to plays and essays, both in Bengali and English, to her credit. She is a Poet in Residence at Apples and Snakes in London and was awarded last year the Agora Poetic Residency in Athens, Greece. Residing in London for more than three decades, she is also widely known for her social activism throughout Britain. Azad is the Founder-Chairperson of the British Bangladeshi Poetry Collective and the Bishow Shahitya Kendro London (World Literary Centre), a Trustee of Rich Mix and EC member of Exiled Writers Ink. UK. She is also the pioneer for using a symbol, Bijoyphool (victory flower) in remembrance of the lives lost in 1971 War of Liberation of Bangladesh, here in the UK and then, later in Bangladesh.

Celebrated Photographer Chris Floyd, who has spent his 25-year career photographing household names such as Sir Paul McCartney, Victoria Beckham and Sir Mo Farah, has been commissioned by The National Lottery to capture the portraits. The works aim to create a ‘moment in history’, preserving the work of these champions for posterity and encapsulating the varied and innovative ways art can be expressed.