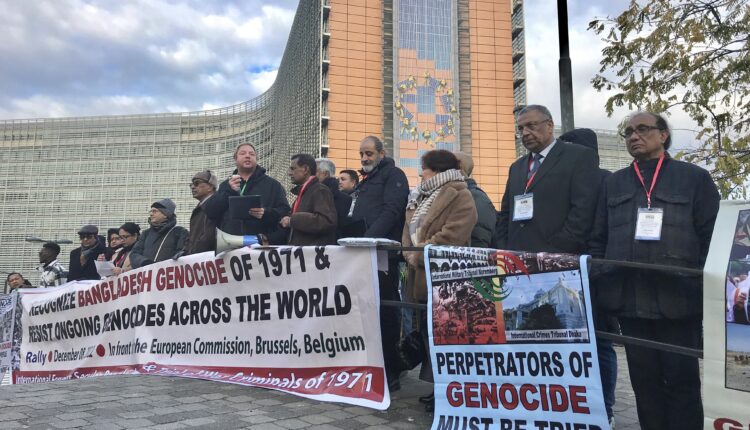 Brussels:  A two-day conference held in Brussels demanding recognition of the Bangladesh genocide 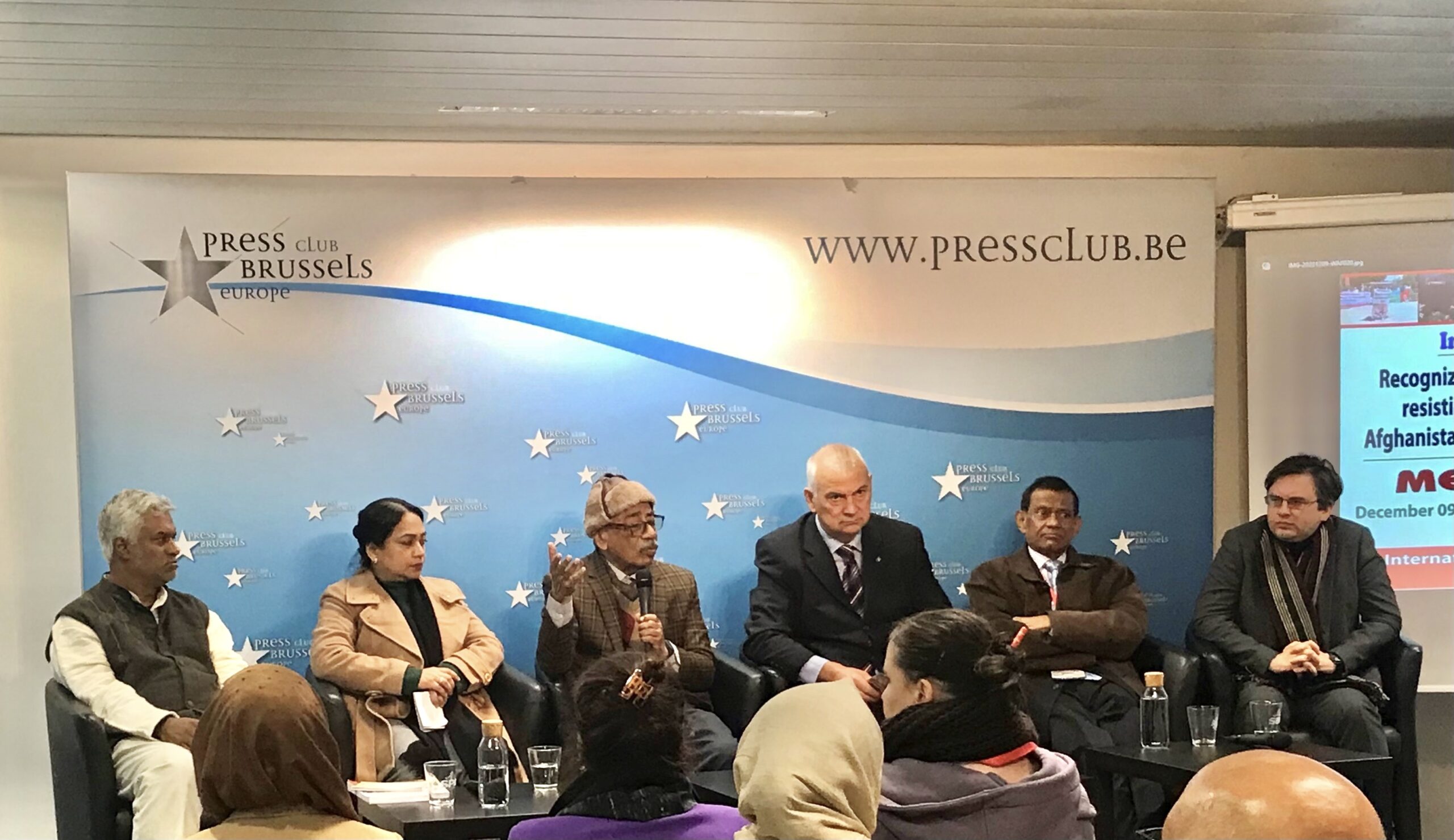 Later, an international conference was held at Baitul Mujib Auditorium in Brussels, attended by the President of the All European Nirmul Committee, Tarun Kanti Chowdhury, Secretary of All European Committee, Ansar Ahmed Ullah, Cultural Secretary of the Swedish Committee, Shilpi Chowdhury, Humayun Maqsood Himu of Belgian Committee, Syed Anas Pasha President of United Kingdom Committee. , Smrity Azad, General Secretary of the United Kingdom Committee, Udayan Barua of the French Committee, Nazrul Islam Jamadar of the Swiss Committee, Syeda Ferdowsi Pasha Koli, managing editor of Shottobani, and hundreds of leaders of various countries of the European branches and organisations of the Nirmul Committee. At the end of the conference, journalist Shahriar Kabir’s documentary “Voice of Conscience” on genocide in Bangladesh was screened. 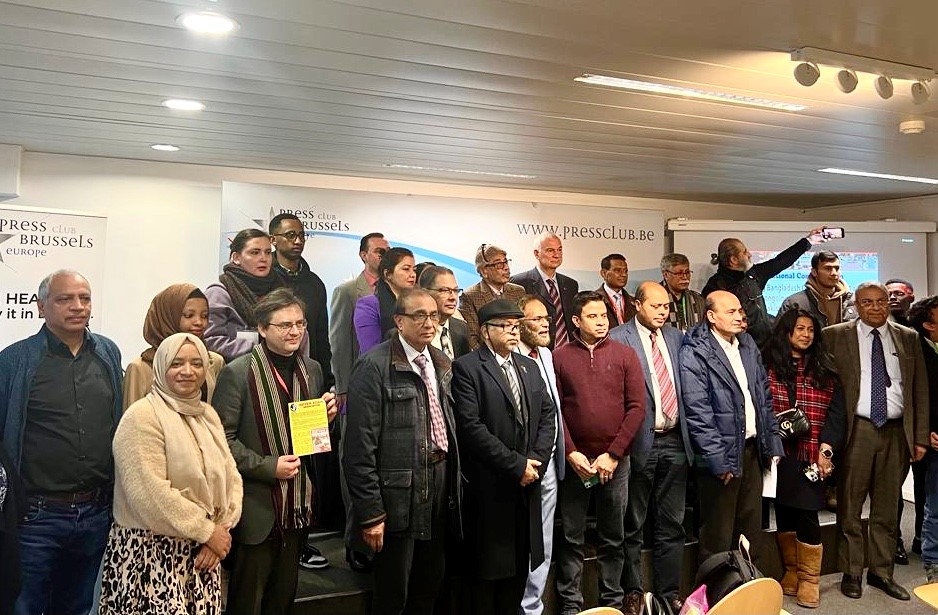 President of the World Sindhi Congress, Dr Lakhumal Luhana, in his speech, demanded international recognition of the genocide by the Pakistani invading forces in 1971 and said that the context of this genocide was created in 1952. But Bengalis protected the right to their language with their blood. They chased the Pakistani invaders from their land, losing three million lives. He said that the Bengali nation is our inspiration for the Sindhi nation’s struggle against the oppression of the Pakistani invaders. Executive President of Baloch Human Rights Council Nasir Dashti said the Baloch understood the struggle of the people of Bangladesh, and we supported the Bengali liberation struggle. We are continuing our struggle with inspiration from the struggle of Bengalis half a century ago. Chairman of the human rights organisation Never Again in Poland, Rafal Pankowski, said, “No more genocide” in the world, along with this slogan, “We want international recognition and justice for all genocide” – the peace-loving world should raise this slogan. We have to do this by recognising the Bengali genocide of 1971. President of Turkey’s 21st Century Forum for Humanity, Mr Ferhat Atik, said, “The mass killings organised by the Pakistani forces in the name of religion in 1971 is a stain on the believers of the world.” International recognition of this genocide is necessary to erase this stigma. The world community cannot ignore the movement for this recognition. President of the Meet the Press program, Executive Director of South Asia Democratic Forum, former MEP Paolo Casaca, pointed to America and Europe and said, “What kind of hypocrisy is it to advise on the human rights of different countries of the world while wanting to avoid the recognition of human rights violated by the most brutal genocide in history half a century ago.” He said that the Bengali genocide of 1971 is a stain on civilisation. Recognise this genocide if only to establish yourselves as leaders of a civilised world. The event’s opening speaker, Shahriar Kabir, President of Forum for Secular Bangladesh, expressed his gratitude for the continued support of world human rights leaders to recognise the Bangladesh genocide and bring those involved to justice. He added that this unprecedented support of human rights leaders in today’s movement to recognise the genocide that took place fifty years ago proves the position of peace-loving people on behalf of humanity. We are grateful. Former Justice Shamsuddin Chowdhury Manik, president of the South Asian Peoples Union against Fundamentalism and Communalism, delivered the concluding speech.

The Press Conference was part of a two-day international conference held in Brussels on 8 and 9 December at the initiative of the All-European Forum for Secular Bangladesh to demand international recognition of the genocide of Bangladesh and to prevent the ongoing genocides in Myanmar, Afghanistan, Pakistan and the world and the safe return of the Rohingya refugees who have taken shelter in Bangladesh, the victims of genocide in Myanmar. Lawmakers, politicians, intellectuals, cultural activists, and leaders of human rights and peace movements from fifteen countries, including Bangladesh, took part in the conference.