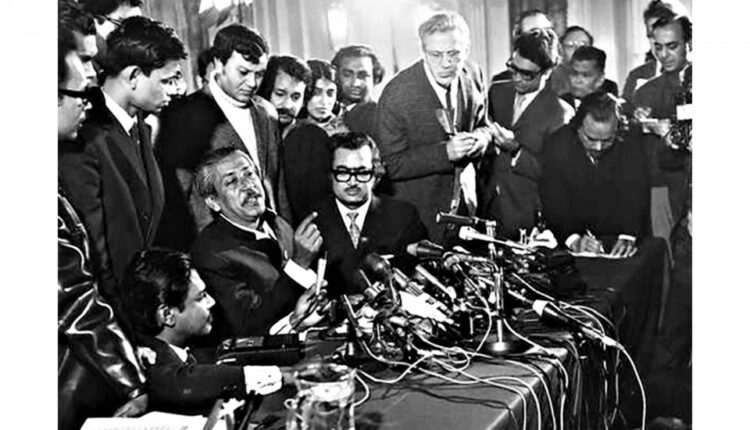 Londonঃ British minister, senior members of UK House of Lords and Parliament, ambassadors, renowned journalists and community personalities at a high-profile commemorative event organised Friday by Bangladesh High Commission London remembered with great honour the historic maiden visit of Bangabandhu Sheikh Mujibur Rahman to the United Kingdom on 8 January 1972, observing that his extraordinary visit laid the foundation of Bangladesh’s global diplomacy. Paying their profound homage to Bangladesh’s Founding Father, they also recalled his deep relationship with the UK government, its people and the British-Bangladeshi expatriates.

Foreign Minister AK Abdul Dr Momen in his speech said Bangabandhu’s stopover in London on 8 January 1971 before he reached independent Bangladesh and subsequent meetings with the then British Prime Minister Sir Edward Heath and opposition and Labour Leader Sir William Harold demonstrated an unqualified friendship from both the ruling conservative government as well as the opposition labour party and unconditional love for his Bangladeshi-British people.

Dr Momen said, “Bangabandhu’s 8 January official meeting with Sir Edward Heath set in stone a strong Bangladesh-UK friendship to grow in leaps and bounds over the past 50 years and paved the way for Bangladesh’s official recognition by Britain on 4 February 1972.”

Lord Tariq Ahmed said, “Bangabandhu Sheikh Mujibur Rahman is an inspiration not just to the Bengali community across the world but to many who fight for liberty and democracy. He laid the foundation of a strong partnership and deep friendship that Bangladesh-UK has been enjoying in the past five decades since his maiden visit to the UK.”

He said that Bangabandhu’s founding vision of a democratic, secular and inclusive Bangladesh was an inspiring one; and the UK would remain a critical partner of Bangladesh seeking to support peace and prosperity for all its people led by the illustrious daughter of Bangabandhu, Prime Minister Sheikh Hasina.

Paying profound homage to the Father of the Nation High Commissioner Saida Muna Tasneem in her opening remarks said, “Bangabandhu’s maiden visit to the UK was the beginning of the friendship and commitment between newly independent Bangladesh and the UK.”

The High Commissioner hoped that the UK government, its people and British-Bangladeshi expatriates would extend their continued appreciation, understanding, cooperation and support in pursuit of a democratic, secular, self-reliant, inclusive middle-income Bangladesh by 2021 and developed economy by 2041 under the leadership of Hon’ble Prime Minister Sheikh Hasina.

Leader of the Opposition and the Labour Party Rt Hon Sir Keir Starmer, MP, paid his deep tribute to Bangabandhu and said, “Bangabandhu Sheikh Mujibur Rahman was a great statement who spent 14 years imprisonment for fighting to establish civil, political and cultural rights of his people and leading his country towards independence.”

Citing the meeting between Bangabandhu and former British Prime Minister Sir William Harold said that he was incredibly proud as the two great leaders shared a rare friendship based on their belief on equality and justice; and that bond provided a strong platform for the friendship and relationship between the British people and people of Bangladesh”.

Representing Conservative Party Chair Amanda Milling, Vice Chairman of the Conservative Party Ms. Nickie Aiken, MP, said the bond that Bangabandhu had established with the UK since his stopover in London would continue to guide Bangladesh-UK bilateral relations in the post-Brexit and post-Covid era.

She said, “I understand that Prime Minister Boris Jonson will be working more closely with Bangladesh’s Father of the Nation’s daughter Prime Minister Sheikh Hasina to optimise bilateral trade and investment and facing risks from climate change.”

Shadow Secretary of State for Foreign and Commonwealth Affairs Lisa Nandy, MP, said she is immensely proud to have British-Bangladeshi heritage as her father was a Bengali. She affirmed that her party would be working closely with Bangladesh High Commission as well as with the British-Bangladeshi community to celebrate Bangabandhu’s birth centenary and the 50th year of Bangladesh independence and Bangladesh-UK diplomatic relationship.

A documentary on the Father of the Nation was screened at the beginning of the event that followed a cultural presentation of sarod recital and dance titled “Bangabandhu the Braveheart: A Veer Rasa”, by renowned classical musician Rajrupa Chowdhury and prominent artiste Sadia Islam Mou and her troupe.

The journey of the far-right into Government

CPRMB mourns the loss of its president Devashish Das